The following is adapted from my best-selling book Stress-Free Money.

Recent studies indicate a majority of Americans have no idea how much they need to save for retirement, so they pick an arbitrary, round number like $1 million or $5 million or $10 million. While having a random savings goal is obviously better than no goal at all, finding a more accurate retirement number doesn’t have to be complicated.

Besides that round number, people who study personal finance can sometimes think the number they’re striving for is the investment return—in other words, the growth they need each year, such as 8 percent annually.

Here’s the truth: both of those numbers are wrong. Forget focusing solely on your calendar year rate of return. Forget your big lump sum, like it’s some treasure you need at the end of the rainbow allowing you to retire into the sunset. Scrap all of that.

If you’re preparing for or nearing retirement (or if you’re already there), there is only one magic number you should focus on: the monthly incoming cash flow you need to be comfortable. Below, I’ll cover three questions you should ask in order to determine that number.

#1: Do You Know How Much You’re Spending?

Finding your number means first looking at your spending. We often ask clients to look at their last twelve months of spending from their bank account, to start. Most banks will easily produce a report categorizing spending for the last year. Whichever method you choose, use concrete data over a one-year period. That allows you to calculate a meaningful average that includes major once-yearly expenses, such as property taxes, insurance, and so on.

Finding the real number requires you to dig into your past in order to make the most accurate possible estimate for the future, including the expenses you have today that you won’t have later and vice versa. Here’s a practical example: today, you might be making a hefty mortgage payment every month. However, healthcare will cost a lot more later in life, and if you have more time in retirement to golf, eat out, and go to shows, those costs will go up.

The conventional wisdom estimates you’ll spend eighty percent of your pre-retirement income once you stop working. In general, however, I find people typically fill up their spending to match what they’re used to, even if the spending categories shift over time. Looking back twelve months will give you a clear picture of what you’re truly spending.

#2: What Is the Monthly Incoming Cash Flow You Need to Live Comfortably?

An example of the importance of cash flow comes from a former financial planning client. The couple came to us making more than $300,000 a year. Their kids were in extremely expensive, well-known private schools. The family also had all kinds of higher-end expenses, from the Peloton bike to meal subscriptions to new luxury cars. As a result, despite their relatively high income, they were drowning in credit card debt—more than $85,000 worth.

This couple is not alone in allowing their spending to rise in proportion to their earnings. If you don’t have a plan, and if you view every decision as transactional, then the more you make, the more you’ll spend. Without a strategy, you’re likely to make poor decisions.

The bottom line? Spending should not rise in proportion to a level of income, regardless of what that income is. You need the discipline to save and invest a portion of every paycheck, so that as your income rises, the percentage that you put away for your future will rise in proportion.

Instead of getting hung up on your investment return this year, ask yourself:

These questions apply whether you’re working or in retirement, and its answer requires you to focus your planning around your spending and future sources of income.

#3: What Are Your Future Sources of Income?

Part of the exercise of using your current cash flow to project into the future involves considering what your sources of income will be when your paycheck stops. Specifically, you’ll need sources of passive income in addition to whatever savings you’ve built up.

If those income sources don’t increase over time, they’ll be eroded by inflation, which means you will be taking a lifestyle pay cut. In addition to your retirement investment accounts, do you have rental property? How much will your Social Security be? Do you have residual business income or annuities or insurance policies to draw from?

Often, people don’t match up all their future sources of income to their actual projected expenses. As a result, they keep putting away an arbitrary amount of savings and hoping it will be enough when they retire. It’s common for people to solely focus on the accumulation phase of life while ignoring the distribution phase of spending.

The important factor is not choosing a “retirement” age or some particular total dollar value in your accounts, but rather whether the income you have will cover what you need to spend over time—a diversified income. That spending number doesn’t have to be a mystery—you can and should come up with an accurate projection today, even if you’re already retired.

Until you get clear on your goals, determine your actual number, and build a plan from there, you’re going to feel substantial stress and uncertainty. You won’t be able to make big financial decisions without worrying if you can afford it.

There’s an adage that says, “The best time to plant a tree was thirty years ago. The second-best time is today.” It’s best to diversify your sources of income in retirement so that you have a variety of trees, ones that bloom during different seasons and yield not only different fruits, but also shade for your family as part of your legacy.

Even though the best time to plant your tree was thirty years ago, it really is true that the next best time is today. You may avoid dealing with the details of your financial life because you think it’s too late, or you might be afraid to face the facts and potentially realize the gap between where you could be and where you are. However, I encourage you to start the process without delay, because it’s never too late to improve your circumstances and get on track.

For more advice on retirement planning, you can find Stress-Free Money on Amazon.

Chad Willardson, CRPC®, AWMA® is the president and founder of Pacific Capital, a fiduciary wealth advisory firm he started in 2011 after nine years of climbing the ranks as an investment advisor at Merrill Lynch. Currently, Chad also manages a $350 million investment portfolio as the elected city treasurer in his community. He created and trademarked The Financial Life Inspection®, a unique process to remove the stress people feel about their money and is a Certified Financial Fiduciary®. He’s been featured in the Wall Street Journal, Forbes, Inc., U.S. News & World Report, NBC News, Investment News, Entrepreneur, and Financial Advisor Magazine. Chad and his wife live in Southern California with their five beautiful children. 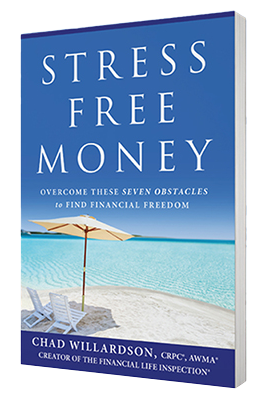 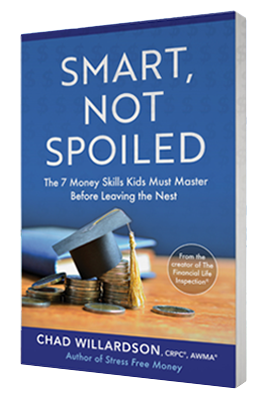